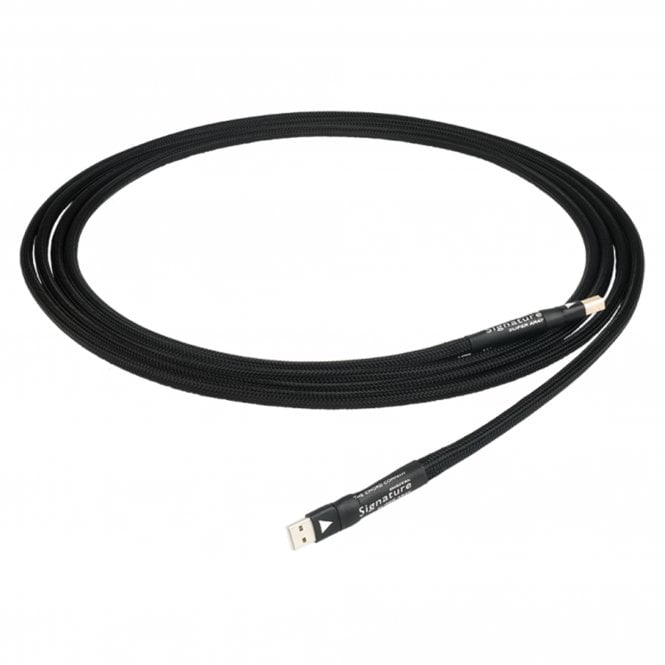 Code: SIG2300
| Usually dispatched within 24 hours
Loading...
Add To Compare
With a music orientated laptop and USB DAC, this cable can form an important part of a remarkable alternative music source. It’s designed and built to carry the digital signal between a laptop and DAC extremely accurately. The only commonality between this and a USB cable are the plugs.
Chord Company's first venture into USB cables was a consequence of having musicians (including some in bands) working at the Chord Company. After copying a CD master recording to a laptop, they were shocked at the poor performance of the burned copies when compared to the original master CD.
At the time Chord were using one of the first DACs with a USB input, so they played the master from the laptop. Still not good but better than the burned CD version. After using better spec ripping programs and playback management, they thankfully got big improvements to the burned CD.
Whilst Chord were happy that they could produce a pretty decent CD copy from the original master, the laptop copy of the master (sent to the DAC via its USB input) sounded clearly worse than the CD copy being fed to the same DAC – so they investigated the construction of the USB cable between laptop and DAC.
After listening to a selection of available (and varying quality) USB cables, Chord realised this was an area worth exploring. The result was the Chord USB SilverPlus, launched in Sept 2011, with silver-plated conductors and high frequency effective shielding. Chord Signature USB followed in April 2013 and has remained virtually unchanged up till now (Aug 2018).
There are increasing numbers of high quality DACs (with exceptional USB inputs) and several high quality music streamers/servers with USB outputs. This has led Chord to revisit and improve the original Signature USB design.
The original Signature USB featured four separately shielded conductors. Chord have now refined the effective gauge of the silver-plated copper conductors and uprated the insulation to a high-speed PE/LDPE/PE composite dielectric. The earth shielding connection is further protected from high frequency noise with its own foil tape layer. The ARAY technology has been uprated from Tuned ARAY to Super ARAY using a Signature USB specific ARAY design. Chord Company have incorporated refinements with both USB A and B plugs. All connections are soldered and the USB plugs are silver-plated to our specification in the UK. Chord believe these changes have all contributed to a healthy improvement in performance. It is certainly a little harder (therefore longer) to build, so while the price has crept up from the original Signature USB, we feel it more than justifies the effort when you audition it against the original design.
There are many high-performance storage and streaming devices available and the new Signature Super ARAY USB is an obvious choice to try with these. Also worth trying between your PC/tablet and DAC, particularly if it’s full of decent rips of your own CD collection, high quality downloads or is being used for streaming hi-def music like Tidal etc.
NB. Chord never recommend the use of Micro USB adaptors with any of our USB cables (if you can avoid it). It is still possible to hear the improvements when upgrading the USB cables. If you are using a really good DAC that uses a micro USB input then it is still worth auditioning a good USB cable with an adaptor.
Technical Specification:
The Signature Super ARAY AES/EBU cable is a very good place to start. Chord would still recommend that you try the S/PDIF Signature Super ARAY Digital at the same and decide for yourself which one is better.
Code: